You’re going to be fine, America, regardless of who will be President.

How did the U.S. become such a strong source of power? What has caused recent economic tepidity? What are our prospects?

Mike Gaiss recommended a book to me, Peter Zeihan’s The Accidental Superpower. It’s one of the best books I’ve read in a long time.

So, those factors will not change going forward.

Sure, economic growth has been flattening, but that’s a function of demographics. Baby boomers are retiring and opting out of the job force, taking with them their capital-generation capabilities. The younger generation below them, Gen X, isn’t as plentiful; in fact, Gen X is the smallest generation in the country’s history. As a result, the U.S. consumer market, which drives about 70% of GDP, is shrinking.

There are two sources of good news, though. First, Gen Y will come online, and that cohort is larger than Gen X. So, in about 15 years, there will be a “repair” to the demographic problem.

Here is the U.S.’s demographics in 2030, with a more “filled out” demographic distribution:

Second, if you’re into “America First,” then you’ll want to know that many of the other nations do not have favorable demographics. Japan is already there: a shrinking population that is comprised mostly of the elderly.

Soon, countries like Russia, China, Germany, France, Italy and Spain will get here, too. Their demographic situations are worsening. For example, here is China in 2040: 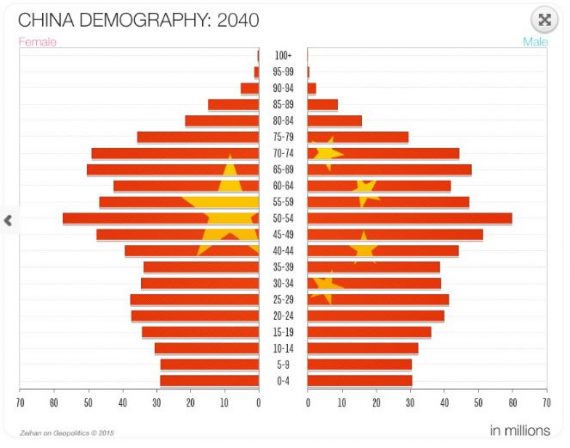 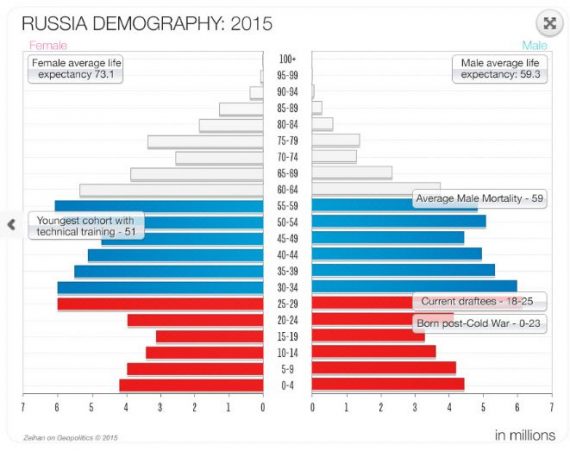 Those societies will increasingly face emptying government coffers. Consumers and workers will be outnumbered by retirees, who will draw pensions and have expensive health costs. So, on the world stage, China, Russia, and the E.U. countries will increasingly become weaker.

Zeihan believes that, in a few decades, there will be only one country that will be the leading provider of capital to the world and will be the only major consumer market anywhere: the U.S.A.

If you’d like to see one of his talks, which is a summary of his book, click here.