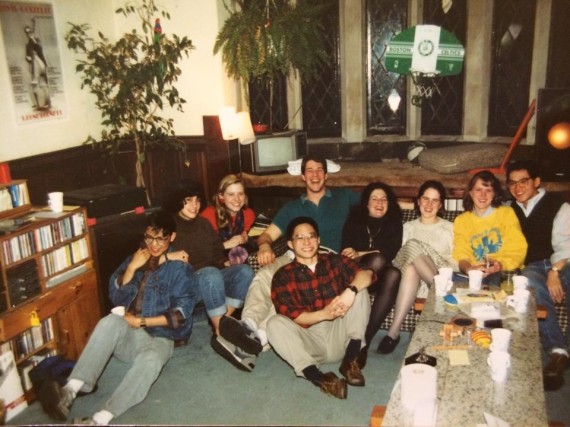 A college classmate shared the above photo recently. It was junior year in college, in 1989, and our merry band had just returned from the Soviet Union. We were having a mini-reunion, which I hosted (I’m at the far right in the photo).

We were part of the Yale-USSR Project. Every spring, for two weeks, 10 Americans would go to the Soviet Union, and every fall, the same number of Soviet students would come to New Haven.

Going to the Soviet Union during the height of the Cold War is hard to explain. It was intense to see the long lines, the sparse shelves at stores, and to harbor the strong suspicion that we were being watched by the KGB. The food was very meager.

As Gorbachev was debating where to take the country, and just as liberalization was emerging via perestroika, I also was struck by what I heard over and over from students: “Russia isn’t a fit for democracy. We always have had, and will always need, a strong leader.”

I think about that trip often as I read these days about how our government is trying to parry with Putin over Ukraine. Putin is definitely “strong.”

Frankly, I don’t think democracy is a fit for every nation. I know that sounds heretical, but even in the U.S., we’re not a pure democracy. We have a republic, where we elect leaders who represent us in Congress. The Founding Fathers didn’t trust that we, the masses, could make the right decisions. Moreover, even with free elections, our Congress and President aren’t getting much done in most vital areas.

So, I think about all this as the Western media criticizes Putin. But, consider this: he is extremely street-smart. And, he is getting a lot done for his country.