With all the debate going on regarding the proposed budget, I thought I’d do some on-line searching to look at defense. The President is proposing to shift spending away from some domestic programs and towards defense. The view is that the U.S. military has become weak.

I’m no expert, but I was struck by this Wikipedia chart, which shows 2015 defense spending in billions of U.S. dollars for the top five countries: 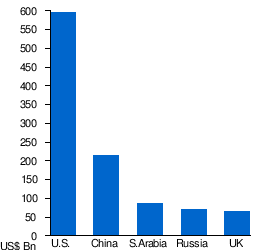 You read a great deal about Russia in the news these days. It almost feels like a new Cold War. But, the reality is that the Soviet Union largely collapsed in 1990 because it could not keep up with the U.S. on defense spending. It also is facing a demographic implosion, whereby it soon will be like Japan: a shrinking population that will reduce GDP and limit the number of troops it can deploy.

On the other hand, the U.S. continues to grow. It also is the only military superpower in the world, as it is the only country with major aircraft carrier groups that allow it to bring war to other nations in their territories (cf. Peter Zeihan, Accidental Superpower).

I think a little bit of data can go a long way.