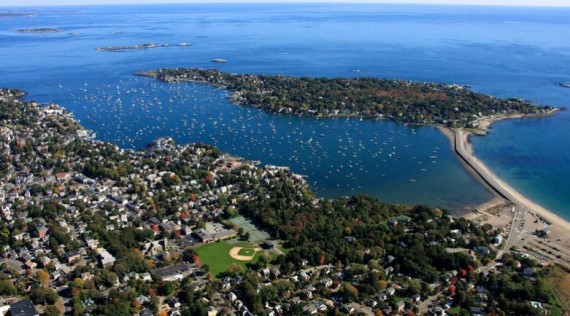 Over the weekend, the extended family gathered together to celebrate a milestone birthday for my father-in-law, Larry. I feel very fortunate to write that he is an amazing person and has been a wonderful role model for me.

Honestly, I was pretty nervous before meeting him. As I courted my girlfriend-now-wife, I over time heard snippets about him and his family. They come from a long line of Dartmouth (which an ancestor founded) and MIT Sloan graduates, Larry used to race a 19-foot sailboat (photo of the harbor is above), and his father was the CFO of a large public company. His mother went to Smith, and the family is very well-educated, well-traveled and super-accomplished.

So, when I was invited to meet him and my wife’s step-mother, Deirdre, my knees were knocking. I mean, here I am, an immigrant kid, who grew up in Brooklyn for most of his childhood.

But, Larry and Deirdre were so welcoming. They were, and continue to be, some of the most gracious people I’ve ever met. They’re unfailingly polite. They’re very generous. They paid for our wedding reception, and when we were about to buy our house, surprised us by contributing to help with the down payment.

They’re fun and kind house guests, and I always have interesting conversations with them. They read a lot and are incredibly engaging.

Over time, I got to know all of Larry’s siblings and their children.  Once a year, the whole extended family (usually 50+ people) gather in Connecticut for Thanksgiving. I still remember the first time I met everyone at one such event. It felt like a never-ending crowd of very tall and very preppy blondes. I definitely felt like I stuck out, but everyone was, and always been, so welcoming.

It was at that gathering that I first met Larry’s mother, who was probably one of the most genteel people I’ve ever met. Stories abound about her generosity, manners and sense of style. I met her second husband (her first husband, and Larry’s father, had passed away in the early 1980s), whom everyone called “Stu-Daddy.”

I particularly connected with Stu. He too was in business, traded stocks for fun, and was always incredibly thoughtful about politics and the economy. He was so down-to-earth, and he always seemed so unassuming, even though his father was famous and founded the business schools at Stanford and Northwestern.

Frankly, I was very sad at each of the grandparent’s funerals. They were amazing people.

Over the many years, I’ve very much appreciated my relationship with Larry. When I started Kepha, he was very supportive. I’ve never heard him raise his voice or lose his cool. He is very accomplished but is always very humble.

So, Larry, thank you for your friendship and support over the decades. Thank you for welcoming me with such open arms. Thank you for giving me your official OK to wed your daughter, to whom I’ve tried to be a great spouse, in spite of my many weaknesses.

My warmest wishes to you for a wonderful birthday!