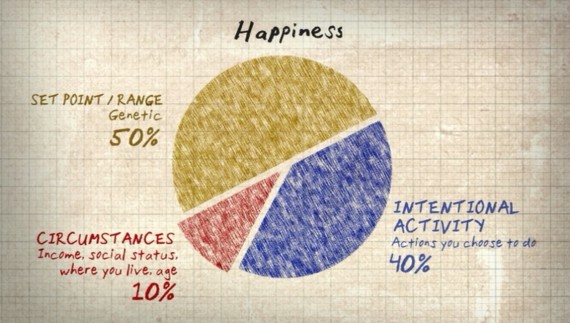 Friday was a great day, as I spent it at the MassTLC unConference. It was a fun time to reconnect with old friends, make new ones, and learn about some cool stuff.

Also, Anne C. Mitchell and I helped direct a conversation called “Brains & Bliss.” We covered two agenda items: what does the latest neuroscience research say about happiness, and, how can you apply those findings to your company, family and self? Paige Arnof-Fenn wrote about it. It was a lot of fun.

We covered a lot of ground, but I’d like to write about one thing we addressed: what drives happiness?  The punchline is that much of happiness is a choice.

For example, the chart at the top shows that each person has genetically inherited a happiness “set point.” Some are happier than others. But, there is no such thing as genetic determinism as it accounts for only 50% of happiness variability.

Another 10% of happiness is driven by extrinsic factors, such as money and status. The old adage that “money doesn’t buy you happiness” is in fact true.

The remaining 40% of the pie chart is a collection of intrinsic factors that you choose. They include things such as connecting with friends/family, exercise, encounters with nature, giving back, prayer, meditation and learning something new.

Ever wonder why a hike is energizing? Do you find exercise addicting? Does a good new book or movie delight you? Does chatting with an old friend usually involve some laughs? Well, our brains are wired for that stuff.

So, why write about this as a VC? I find that happier teams do much better. They get more done, they bounce back faster from failure, and they are able to keep going through pivots and struggles. They laugh more. There may even be Business Love. They have a positive company culture that demands performance, but builds up people vs. tearing them down.

Now, I have found that highly-critical company cultures can also be productive. A boss who yells and bullies. An employee group that is highly stressed and where people are treated as a means to an end. But, I’ve seen that, over time, it isn’t sustainable.

There’s a saying in VC: “it’s easy to get along in a bull market.” When a company is doing well, people will bite the bullet, vest their equity and keep plugging away. But, eventually, that company will hit a speed bump and the easy money will disappear. That’s when people leave in droves.

We are living in a golden age of neuroscience.  Brain imagery technology is becoming cheaper and nearly ubiquitous. There is a lot of great research coming out that is applicable to entrepreneurship. If you’d like to learn more, contact Anne via LinkedIn or on Twitter via @CoachACM.

Last, that group discussion was so uplifting to me, as I watched the expressions on people’s faces. People left with huge smiles and the room was absolutely bursting with energy after the last group exercise.

Isn’t it great that we now know that we can choose happiness? We no longer have to be bound by feelings of low self-esteem, about what our parents did or not do for us, or difficulties from the past and present. We have tremendous hope.

Choose to have a happy day, everyone!