On Sunday, I went to a memorial service for F. Washington Jarvis, known as “Tony” to all. A lion of an educator, he for 30 years was the headmaster at our son’s old school, The Roxbury Latin School. 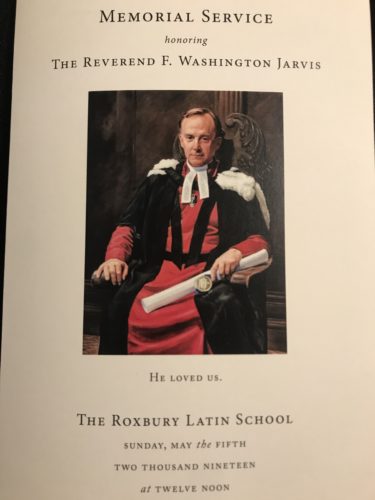 Tony took over the then-struggling school at the mere age of 28. Maybe it was luck, maybe it was skill, but he utterly transformed it.

Tony first and foremost was a committed educator, who valued metrics as much as everyone, but based the school’s mission on something more ethereal, and in today’s world, somewhat hokey. The mission: a place where every student is “known and loved.”

Those who knew Tony attest to the fact that he often was tough, blunt and caustic, but also, generous, loving and caring. Like many entrepreneurial personalities and born leaders, he could be a contradiction.

But, he took seriously his own role and poured his life into the school while the same time serving as a Priest Associate at an Episcopal parish in Dorchester. In education, he was viewed as someone who had few peers.

He is famous for his “Tony-isms,” which are now ingrained in the school’s culture and repeated often: “Honesty is expected in all dealings”; “We care most about what kind of person that boy will be”; “From those to whom much has been given, much is expected.”

Over the years, so many former students and faculty members talked about how Tony transformed their lives. He was that much of a visionary and personality. He consistently asked people to think beyond their own needs and called them to greatness. Mike Pojman’s remembrance of Tony, link here, brilliantly remembered and captured so much about the man.

When Tony was already battling cancer, I had the chance to meet him for dinner. Though diminished in energy, his presence was evident. He had that ability to focus just on you and make you feel that you were the most important person in his life.

How both wonderful and terrifying that must have felt as a 15 year-old boy? To be seen, known and valued, while, at the same time, to be held accountable?

Tony’s eyes often lit up as we moved to a topic that intrigued or moved him. It was a meal to remember. He of course wouldn’t let me pay, and I left the dinner feeling that I had just met a very special human being.

If you’re a parent or work with young people, I strongly recommend his book, With Love and Prayers. If you’re pressed for time, here is the end of his last talk at Roxbury Latin, one which I was fortunate to attend.

In that talk, Tony was emotional as he stated the words below, perhaps, knowing that it was the last time he would address his beloved school community:

”I wonder if, in all the world, there is another room like this one in which are gathered a group of people who are as talented and hard-working, as tough in the best sense, and tender in the best sense, as gifted and as privileged, as you are. ‘From those to whom much has been given, much will be expected.’

”You are few in number. But in history, in every single generation in all of history, it has always been the few, the few courageous individuals who have changed the world. You are the few, in your generation, who can make all the difference. You only get one earthly life. Why not decide now to do something great, something courageous with your one and only earthly life? God bless you.”

Thank you, Tony, for reaching so many boys and families. You have made me a better parent.

2 thoughts on “In Memoriam: Tony Jarvis”