Kathryne Reeves is a senior executive at Cardinal Health. We met at business school, and I am grateful that she is a friend.

She recently emailed her 500+ team members, and she forwarded the note to me. It is incredibly moving. With her permission, she is letting me post it. It is below.

Thank you, Kathryne. I miss you greatly.

I will begin this Wednesday’s message by admitting that it is difficult to share my thoughts with you this week.

I am filled with anger and sadness at the state of our country. As an African-American woman, the current situation has been especially hard for me and my family. My anger and sadness stem from the fact that George Floyd could have been my son, my husband, my father or my brother.

As you likely know by now, George Floyd was arrested for trying to pass a fake $20 bill. He was treated brutally and inhumanely by a veteran Minneapolis police officer. His death was recorded by a bystander. The cell phone video captured both the policeman’s emotionless face, his hands casually inserted in his pockets, as the full weight of his body surged onto George Floyd’s neck for 7+ minutes. It captured George Floyd’s painful cry of “I can’t breathe” over and over.

We heard George Floyd call out for his deceased mother. We saw urine seep from his body and glide out from under the patrol car onto the street as his life left his body. But, as painful as the video was and is to watch, the true pain stems from the lack of response by the authorities for his needless death. The main officer in question was not arrested for days, and the other police officers, who stood watch and/or actively participated, still have not been arrested.

This passive inaction solidified a sense of how worthless the life of an African-American person can feel in our present society. George Floyd’s death also reminded us of the long line of similar deaths…Trayvon Martin, Ahmaud Arbery, Botham Jean, Tamir Rice, John Crawford, Philando Castile, Eric Garner, Walter Scott and even Emmett Till.

Again, the death of George Floyd and our criminal justice system’s inaction reminds me that George Floyd could have been my son, my husband, my father or my brother.

As your team leader, I often make requests of you. In light of these events, the humble request I have for you on this Wednesday hearkens to a story I heard repeatedly as a child. As many of you know, I grew up in the Deep South of the United States in Mississippi, and many of the lessons I learned as a child came from the Bible.

So, I share this story with you not as an endorsement of Christianity. In fact, I sincerely respect our wonderfully diverse Services Business Unit, composed of many races, nationalities, perspectives, faiths and stripes.

However, I believe the message of this story is universal, and it reflects the call we all should heed in this moment. It is the biblical story of the Good Samaritan, which goes like this. [Jo’s note: important to note that there was a lot of animosity between Samaritans and Jews.]:

A man was going from Jerusalem to Jericho, and he fell among robbers who stripped him and beat him and departed, leaving him half dead. Now by chance, a priest was going down the road; and when he saw him, he passed him by on the other side of the road. So, likewise a Levite, when he came to the place and saw him, passed by on the other side. But a Samaritan, as he journeyed, came to where he was; and when he saw him, he had compassion.  He went to him and bound up his wounds, pouring oil and wine. Then, he put the man on his donkey, took him to an inn, and took care of him. The next day he took out money and gave it to the innkeeper, saying ‘Take care of him; whatever you spend, I will repay you when I come back.’ 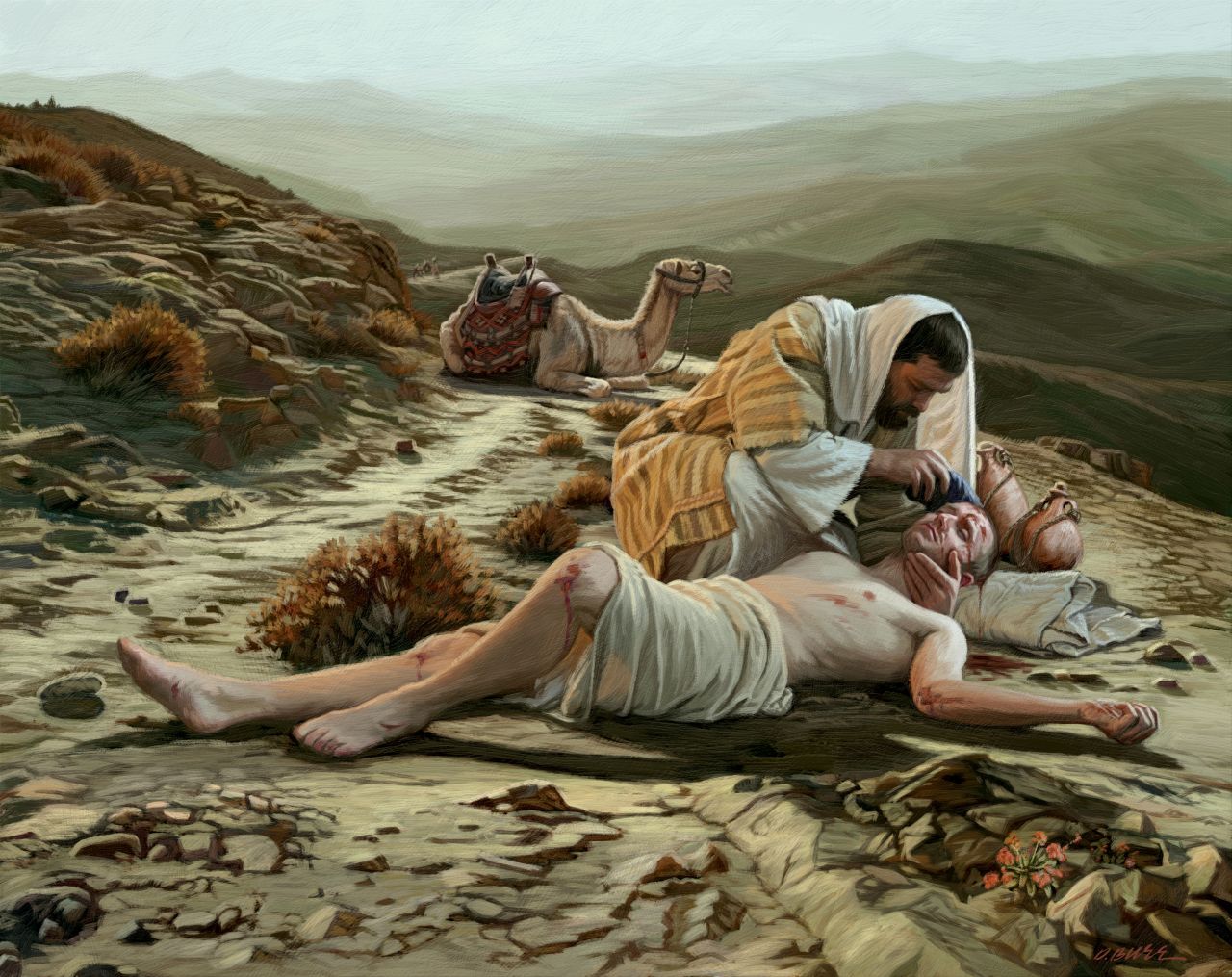 In my simple mind, I believe that leadership is, by definition, taking a stand when there are significant consequences. Our senior leaders, Mike Kaufmann and Ola Snow, have asked all of us to act with a renewed sense of curiosity, compassion and empathy with regard to the issue of racial justice.

As I reflect on George Floyd’s death, ultimately, I believe it calls upon us all to treat each person as valuable. For example, do I have to be white and from rural Ohio to have empathy for the loss of life and livelihood in the rust belt? Do I have to be gay or have a gay son to understand his desire to live an open full life? Do I have to be blind to understand the hardship of the disabled?

The answer to these questions is unequivocally “no”!

So, in the days following George Floyd’s death, when our nation’s streets are full of protesters, violence and opportunistic rioting, I have been asked by my white colleagues and friends, “As a white person, what can I do?” I think the answer is found in the parable of the Good Samaritan, which is to treat others as you would like to be treated.

You don’t have be African American to stand against racism. Watch the Bryan Stevenson TED Talk. As Mike Kaufmann said, learn about our country’s history of slavery, Reconstruction, Jim Crow and the ongoing impacts of life in contemporary America. Do not become party to the silent, insidious institutional racism that comfortably exists in corporate environments. Reach out to our HR team and ask for books to read or ideas for team activities. Be vulnerable. Be curious. Brush aside old habits, and learn new ones. Be supportive and embody the actions of the Good Samaritan.

If you need to, try to change your individual behavior and attitudes and then move on. Work to change the systems around us for the better.  In most cases, I have found that true earnest effort (even if it’s not perfect) will be met with grace. You and your genuine effort are enough for me.

For most of my life, I have had moments where I felt hopeless and pessimistic about racial justice. Lately, I’ve just felt numb. I feel like one atrocity is happening after another. The headlines of my constant breaking news text feed reads “tragic killing” of “insert name here” African American man, woman, girl or boy in “insert state or town.” The hashtag slogans constantly shifting. The cry used to be “Hands up, don’t shoot” then “I can’t breathe.”

Progress has just seemed out of reach. Truly, I have felt alone and helpless, with the pain all running together, ending in the constant and ridiculous platitudes of “thoughts and prayers” or “rest in peace.”

I admit, I am still a work in progress. But, somehow despite all of this needless suffering, I have over and over returned to my faithfulness. Faith is the substance of things hoped for, the evidence of things not seen. Lately, it has been very hard to find visible evidence that progress is achievable. In fact, at times, events look retrograde, returning to the days of George Wallace, Ross Barnett and Bull Conner.

And yet, I dig down and find some tiny morsel of faithfulness. My forefathers’ and mothers’ faithfulness is one key reason for my mere existence here today.  As many of you know, I am a proud mom to two African-American teenagers. And frankly, for anyone of any race, becoming a parent is a profound act of optimism, an optimistic belief that the world will be better for future generations.

I would urge that each one of us, as leaders in our business, our homes and our communities, try, even in these bleak days, not to sink to cynicism and pessimism. Instead, be a light. Speak up against those who seek to convey the rhetoric that systematic racism is not real.  Be a witness. Continue forward.

I know in my heart, even on my worst days, I strive to live our values. To be a fair and inclusive leader whereby all points of view are heard and respected. I know I may not always get it right, but that’s OK.  Genuine effort, not perfection, is what we all need right now. With the Good Samaritan in mind, I would ask that we all show effort, encourage others, have faith in the possibility of progress, and strive towards a better future.

With care and respect,

One thought on “Kathryne Reeves: ‘On the Road to Jericho’”