That was my night last evening, and it was a long chain of gift-giving and opportunism that led to it. Let me explain.

I love to cook and a friend sent me a gift, Barbara Lynch’s Stir cookbook.  Such a kind gift!  A few days later, a board meeting ended early, and I decided–spur of the moment–to go to B&G Oysters for lunch, one of Lynch’s restaurants. I’d never been and it was close by.

I started chatting with one of the staff members there, and we discussed wild vs. farmed salmon. I can get a “little” obsessed about food, and so I asked him, for example, if he has ever tried wild salmon from the Copper River in Alaska. Little did I know that he was one of the managers. He invited me to their upcoming 10th anniversary party. Cool.

Now, I was tempted to pass. The 9 pm start time on a Wednesday seemed very late for a middle-aged dude like myself. But, I started to entertain the idea. So, I went to the B&G page on Facebook and saw that my friend C.A. Webb, the Exec. Dir. of the New England VC Association, “liked” the restaurant. Bingo.

Now, C.A. and her husband Michael just had their first baby a few weeks ago. I’d been looking for a gift for them, and now had a”Eureka!” moment. So, I invited them to the party and told them it was my treat. 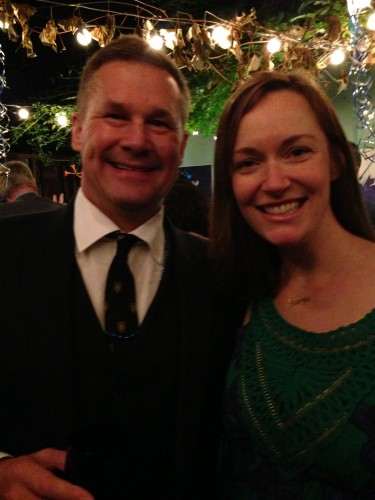 I’m so glad I did. Here’s a photo of them, all aglow and all smiles.

Now, I almost bagged on the party, as I was feeling a little bit under the weather. I was going to tell them to go ahead without me, that their tickets were already paid for and would be ready for them. I’m glad I didn’t, as they told me an incredible story.

So, there we were, slurping raw oysters, drinking elegant grown-up beverages, as super-friendly B&G folks passed around fried oysters, fish sandwiches, shots of the aforementioned Curaçao, and lots of other goodies. Everyone was grinning, drinking and chowing down, and the blues band began to play. Some people were starting to enjoy a bit too much Curaçao.

“You don’t know,” Michael said, “how grateful we are that you invited us, how much this place means to us. It’s our first night out since the baby was born, and this is where we had a seminal lunch.” (He’s from New Zealand–they say words there, like “seminal.” Michael is also super-smart and I love talking to him.)

“This is where we fell in love,” C.A. said, “at a table that was right there.” She pointed to a particular spot.

“And, that night,” she said, “he threw me a birthday party and had champagne and sushi there for everyone.”

Last evening, C.A. and Michael were so joyful. They smiled slyly at each other, whispered in each other’s ears, and got each other drinks. You could see her pupils dilate when she spoke to him. You saw the tenderness when he addressed her and spoke lovingly about her.

A cool part of my job is you get to meet some awesome people and can build deep friendships. C.A. and I have become good friends, and I have a great deal of affection for her and Michael.

Before I left the party at midnight (man, live blues is awesome), I texted my book-giving friend to say again “thank you” for the cookbook. I explained how that one gift kicked off a cascade of events, which resulted in a fun outing for a wonderful couple. And, I drove home smiling, thinking about how cool it was to give such an accidentally meaningful gift to friends.

I no longer believe in luck. I think life is about being open to opportunities and being willing to follow your heart and pursue seemingly random events. In the end, it may all come together on a magical night at B&G Oysters.

I love you C.A. and Michael. You two are awesome and I’m so happy for you.