Last week was killer for the Boston/Cambridge community. There were so many great events, such as AngelHack, FounderCon, TechStars Boston’s Demo Day, and the Mass TLC’s “Un-Conference.”

I attended Demo Day and the Un-Conference (and, organized a panel discussion at the latter), and also, had dinners with the MassChallenge founders and Backupify’s Rob May, as well as a lunch with TechStars alumnus Winston Mok.  There was also an impromptu joke-fest with Nate Drouin and Kerryn Gerety.

So, it was a lot of community buildin’ stuff.  It was fun.

In particular, Demo Day had a special place in my heart.  Here’s a photo of all of the entrepreneurs on stage. 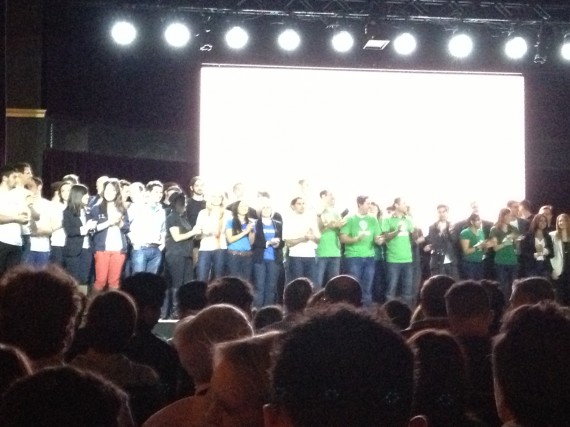 I mentored two TechStars team this class (BetterFit and Fetchnotes) and was feeling very sentimental as they presented their pitches to the huge crowd.  I will miss working with them, but hope both will continue to reach out for help and unbiased advice.

I think in the end, it’s all about community. Each of us has tremendous challenges and obligations. But, there’s something great that happens when a start-up community gathers to cheer on entrepreneurs and to help out each other.