One of the benefits of a Plan B Christmas? A food tour, while Mrs. T. and our daughter napped during the day. And, a different Christmas Dinner. More below.

On Christmas Eve, I headed to my favorite pizza place, Max and Leo’s. They have a coal-fired oven that cooks thin pizzas in just a few minutes at a blistering 900 °F. 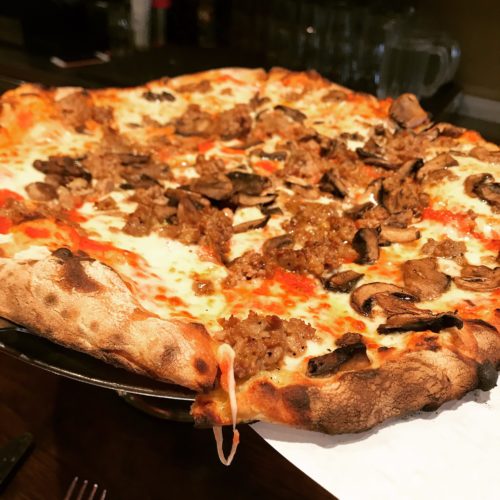 At the grocery store, lobster, one of our daughter’s favorites, was on sale. I basted the tails with butter, salt, pepper and paprika and broiled them in the oven. 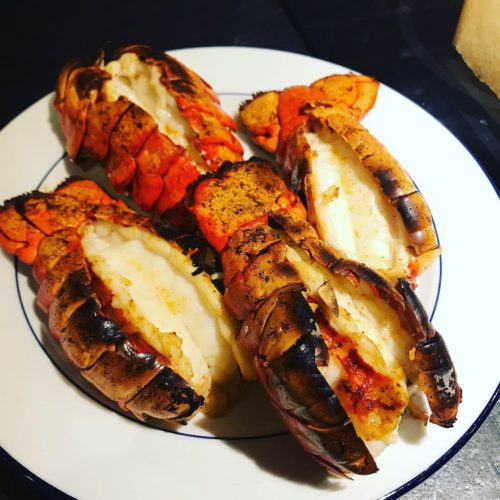 I’ve always wanted to go out for Chinese on Christmas Day. After Mass, I headed to The Dumpling House, which was jam-packed. The tables were pushed tightly against one another, and I was seated next to an elderly couple, and we became fast friends.

I ordered the guotie, pan-fried dumplings that symbolize good fortune, and one of my favorites: julienned pork with dried bean curd and yellow chives. I asked them to throw in some bamboo shoots, too.

I also got pan-fried noodles with seafood, one of my sister’s favorites. When we lived in Brooklyn, we used to head to a Chinatown place and always ordered that dish. I intentionally over-ordered to have plenty of food on hand in case the sick crew gets hungry.

For Christmas Dinner, Mrs. T. rallied and made her famous apple crisp. I cooked a mini-version of my usual Christmas prime rib roast. I always ask the butcher to cut me a piece from the chuck side, which has greater marbling and flavor.

This time, I used the reverse-sear method. The technique calls for a long and slow roast at 250 °F, a rest of 30 minutes, and a short burst at 500 °F to brown the exterior. It is meant to create a uniformly pink interior with no grey edges.

Dinner was casual and mellow, in the breakfast nook, cozy and warm, with Advent candles ablaze. We had prime rib, mashed potatoes, vegetables caramelized while underneath the beef roast (the best kind), simply-cooked broccoli and apple crisp. A Cabernet Sauvignon Reserve and sparkling apple cider for drinks.

A small and quiet dinner. An unusual Christmas, with half of the family away, but a memorable one.

The Vince Guaraldi Charlie Brown Christmas album played as I cooked, and we just FaceTimed the children in California. I miss them, but they’re in good hands, visiting my sister and father. They too are on a very serious food tour. It runs in our family!

Merry Christmas, everyone. “For unto us a child is born, a son is given.” And, that has changed everything….