For fly anglers, March is a time for when our eyes are bigger than our stomachs. The sun is starting to get higher on the horizon, the snow pack has largely melted, and bugs are ever so slightly starting to get more active.

After a long winter with iced fly rods, savage winds, and standing in frigid water for hours, we long for the return of summer and its abundance. In March, summer is incipient but is not yet to be. But with the weather starting to turn, we anglers become anxious and hopeful for active fish.

Yesterday, one of my fly fishing friends and I drove over 300 miles in a caravan (lest we get closer than six feet). We were in search of Northern Pike, that famed apex predator that begins to rise from slumber in the spring, ready to slash and attack baitfish. Alas, the river was too high and so we strove to find more amenable waters, hitting two rivers and two New England states, carrying with us the hope and the ache that we would find trout.

The water was 36 °F most of the day, meaning that the fish were placidly hunkered down. Trout are cold-blooded. When water temperatures are low, they conserve their energy and stay put. Even if they were tempted to eat, their movements are slow and clumsy as they vainly try to activate their muscles and killer instincts.

After a long day of casting and driving, the wind started to howl and the sun started to dip. We were cold and feeling colder.

He’s been a fly-fishing friend for a while now, which means that we’re now friends in general. Most men best bond with each other through an activity and it is only after a number of outings together that we are comfortable talking about our personal lives, concerns, and trials.

Most of my angling friends are in the Millennial or Gen Z buckets. I’m the Old Man in our crowd, on the Back Nine of my life whilst they’re just beginning: some are still single and many have yet to have children.

Knowing them has made me hopeful again for America. They’re good men, solid men. They’re great anglers and are generous to strangers on the rivers.

Truth be told, I was feeling a bit sad. It had been a lot of driving amidst a growing sense of failed expectations. My friend and I had started at 5:15 am that morning. The effort appeared fruitless.

And it has been a long pandemic when I think of those who have fallen ill or died. So many lives lost and so much chaos. I’m happy for the accelerated pace for vaccinations but I still grieve.

I grieve for friends who have lost family members and jobs. I grieve for the disrupted work- and school-lives of my children. I grieve for my HBS students and the many adjustments they’ve had to make, gamely reading hundreds of cases while Zooming in for classes and job interviews.

Then, as in a movie, my line paused and snapped me from my internal thoughts. I set the hook and a fish was on. It wriggled with life and energy and my fly rod bounced. I hoped and prayed that the trout wouldn’t pop off during the tense moments when it was unclear who had the upper hand, the creature or the human.

After a brief tussle, the trout started to tire and I relaxed. The fish slid into the net. It was a rainbow trout that had been stocked last year. It was a “holdover” that had managed to avoid predators for anywhere from six months to a year. A survivor. 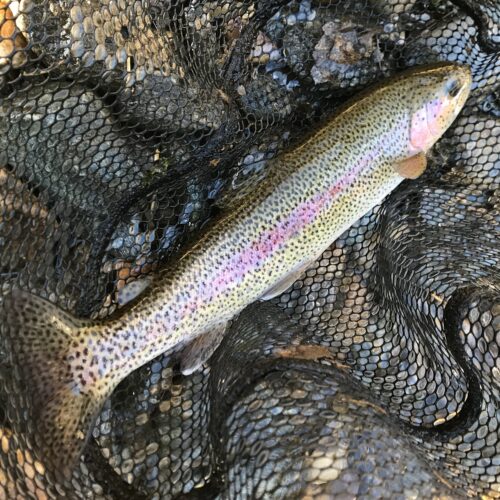 “Rain-bros” aren’t the fish we target, as we’re partial to wild brown trout that are harder to catch and fight like hell. But on a meager day, rainbows are a joy to see. And, my friend soon caught one too.

As it became darker, my friend and I threw a few more casts but we then reeled up and hiked back to our cars. We talked about this and that. Seeing fish provided a needed jolt of energy.

We shed our fishing gear and waders, said our goodbyes, and hit the vacant river-side road for the long drive back to the city, exhausted but happy.

In fly fishing as in life in general, we search and strive. We make plans, get up early, and commit ourselves, hopeful for success and eager to meet our goals. We almost ache to experience again that joy, that fulfillment.

Some of our forays are wildly successful. Some are flat-out failures. But, we beat on, casting away, until the sun disappears and we are left to tally during a very intimate moment, narrated by us and only to us, the results of that day.

In a way, as we ease out of the pandemic, we are born anew, with a chance to right prior wrongs and to pursue paths worthy of purpose. It’s trite but true: we cannot waste second chances.

We are all survivors now. 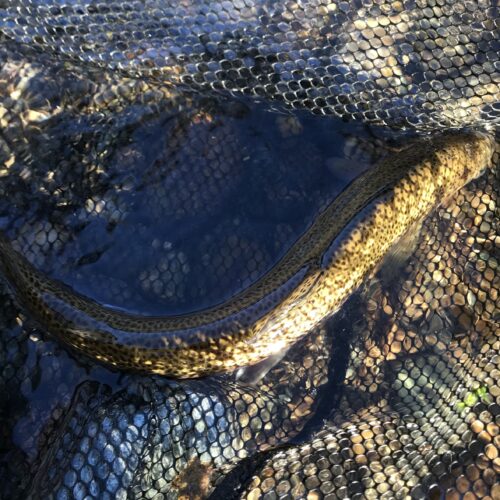 2 thoughts on “Truth Be Told”