My Mr. Mom role will end in a few days. I am here on a Saturday morning at a ballet school, where one of my children takes lessons. Lots of kids and adults in the waiting area. The latter are under-caffeinated. The former appear overly so.

With an hour to kill, I went for a walk. A brisk morning. White earphones on as I listened to music. I walked by this building. 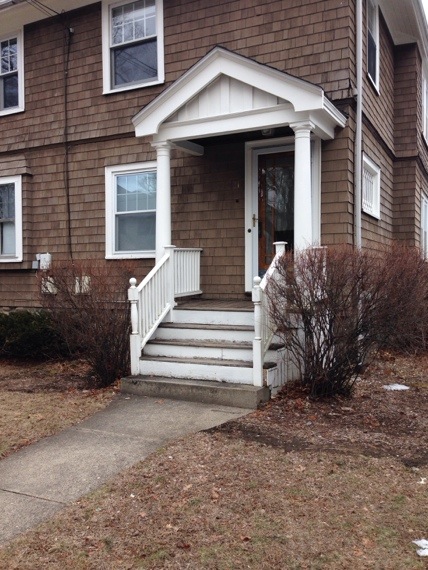 It is where my wife and I used to live. We were renting the bottom floor of a two-family building. It is where our first child lived for a few years, before we bought our own house.

I traversed the same sidewalks that I used to take during my commute to and from work, when I took the train into town. Twice a day, en route, I would walk by a barber shop, where I got my hair cut. My barber’s name was Joe. He emigrated from Sicily and had a very strong accent. We spoke often about the Old Country.

Joe had a very loyal following. Sometimes, you had to wait well over an hour for a haircut. People went to him for decades. Some came initially as boys, and now, came as adults. Joe loved children. Our first child went there for The First Haircut.

When I walked by the barber shop window, Joe would nearly always see me and wave. If he didn’t, I often would knock on the window and gave him a friendly smile.

When he had shoulder surgery and started to miss a lot of work, I still went there for hair cuts, hoping to see him, though we had moved across town. After a while, I stopped going.

A few years ago, my wife ran into Joe’s wife. She learned that Joe had died. The widow spoke lovingly of Joe. I found Joe’s obituary on-line. I didn’t know his children or grandchildren, but I felt as though I did. He spoke often about them as he cut my hair.

So, today, I walked by the barber shop. As I used to do, I peered into the window. Appropriately, the barber’s chair at which I used to sit, and around which Joe once was a ubiquitous presence, was empty this morning.

I don’t go back inside the barber shop any more. It just wouldn’t be the same.