I had a sudden thought the other day in the shower: when will the U.S. end? I mean, every empire or super-power hits the skids at some point, and so, we’re not going to be an exception.

I have been thinking of some disparate data points:

And, most troubling to me: anemic economic growth and rising income inequality. Why? I think these two trends can change everything. Let me explain.

I did a quick Google image search and found some charts on U.S. economic growth and income inequality over time. The data are pretty troubling. The 2×2 chart I put together below summarizes where we are relative to other decades: 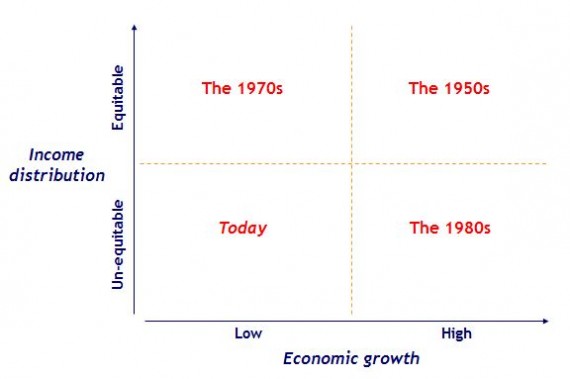 The 1950s were a great decade. The economy after WWII was booming and everyone was benefiting roughly proportionately. The economic tide was rising, and it was lifting all boats.

The 1980s were OK. There was the Reagan economic boom, but troublingly, income was starting to be concentrated. Remember the rise of corporate raiders, investment banking and leveraged buy-out firms?

The 1970s were difficult: we had stagflation in the Carter years, but at least, income inequality didn’t change much. Everybody was suffering, roughly proportionately.

Today is different. We are facing low growth and rising inequality. There aren’t enough good jobs, clearly. But, yet, you read about another hedge fund mogul buying another house, or a 55-person company called WhatsApp selling for $19 billion. Wealth is increasingly concentrated in fewer hands.

Why does this matter? Well, this is when social unrest takes hold and how revolutions start. When people are not able to provide for themselves or families, they get frustrated. When they think the system is rigged to favor the few, they get angry. That’s when people start to take action. They ask for a new system. Sometimes it’s peaceful, and sometimes it’s violent.

Some examples: the French Revolution and the purported saying by Marie Antoinette of “let them eat cake”; Germany in the 1930s when the economy collapsed and a small group of people–Jews–were unfairly and incorrectly blamed; and, Ukraine today, which through months of protests as the economy shrank and citizens protested against the politicians, who had enriched themselves at the nation’s expense.

So, I don’t mean to bum you out, but I really do believe we are at a very serious juncture. Some of us live in the tech world, where jobs are plenty. There’s nothing wrong with that, but I have friends who live in a different reality.

So, can we fix the system, or will the system get overthrown? And, if we can fix things, how do we get there, given how ineffective our elected leaders have been?