It is about a massive study of 20 million subjects and shows the impact of race and gender (link to the actual paper here) by analyzing U.S. Census and IRS data.

The summary is that African-American males face very significant challenges, even if they grow up in high-income households. The data are very sobering.

Here is an important chart. It compares a person’s income percentile when compared to his/her parents’ income percentile. The charts show that there is a significant gap when you break down the subjects by race and gender: 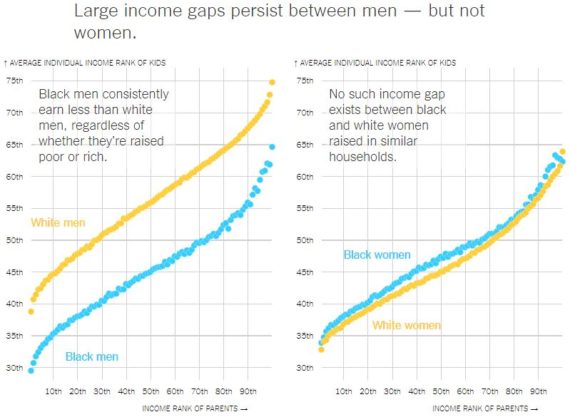 The gaps exist when you break down that data by hourly wage rate, hours worked and employment rates:

The study is a multivariate regression analysis, which does the following: Holding all other things equal, how do outcomes change based on only race and gender?

The takeaway? Outcomes vary significantly if you’re African-American and male, even when you account for your family’s background (your parents’ income, educational statuses, social class, and wealth and whether they were married) and your own profile (educational level, income including hourly wage and hours worked, your job’s industry, how “good” your current neighborhood is, etc.).

So, you can take two people, one black male and one white male, who grow up in the same neighborhood and in the same type of family, and their future incomes will diverge drastically on average based on race.

All this points towards something systemic going on, whether it is bias, discrimination or both.

Here is another sobering chart, which measures incarceration rates by income: 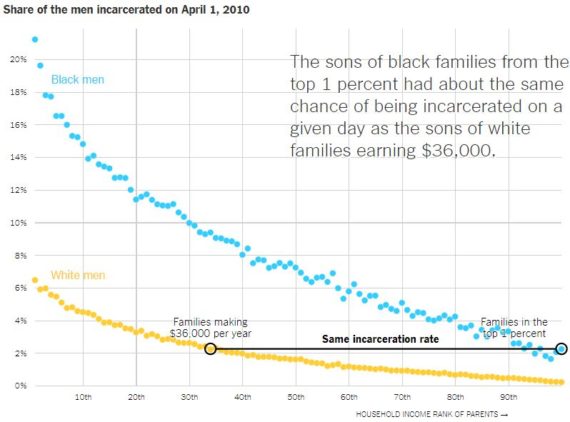 Last, here is a GIF showing how white males born into affluent households tend to stay affluent and that the opposite exists for African-American males:

Well, this is probably the most amazing thing I'll see all week. All downhill from here. https://t.co/ivjpTv4pFN pic.twitter.com/OWE7qdi4NC

I will close with the following excerpt from the article:

If this inequality can’t be explained by individual or household traits, much of what matters probably lies outside the home — in surrounding neighborhoods, in the economy and in a society that views black boys differently from white boys, and even from black girls.

“One of the most popular liberal post-racial ideas is the idea that the fundamental problem is class and not race, and clearly this study explodes that idea,” said Ibram Kendi, a professor and director of the Antiracist Research and Policy Center at American University. “But for whatever reason, we’re unwilling to stare racism in the face.”

If you’re short on time, here is a podcast about the study.