The Internet is down at our office building. So, it was a good moment to swing by and see my favorite barber, Mark. 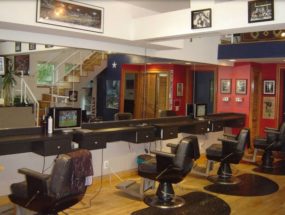 Thankfully, there was no wait, and I scooted into the barber’s chair right away.

Mark has owned a barber shop at the same place for 30 years. He has an uncanny ability to remember you and prior conversations.

I asked him about his daughter, who works at a local tech company, Mimecast, that now is public. The company founders, all immigrants from South Africa, by the way, have very strong reputations in the market. I mentioned this to Mark. He was happy to hear that.

“I think it is all about data these days,” I said, as I talked about the forces possibly driving demand for Mimecast’s products. And, all that boded well for his daughter.

“But, what about the future?” he asked, curious about what would become to the nation if manufacturing jobs continued to disappear. “Aren’t we hosed?”

It was a great question. I didn’t think there were easy answers.

Mark and I chatted a bit about the economy and how nations have to pick what they do best. In our case, the USA is very good in the tech sector.

I also told him that I thought every business now has a data angle.

“Yours, too,” I said. I told him that I started coming to him years ago because his Yelp ratings were so high, and that there were so many reviews.

I also told him that it would be really tough for someone to open a new barber shop near him. It would take a long time for them to catch up to him on Yelp.

So, I told him, data are the reason I started going to him and data could be the reason why no one new has entered his market.

We went back and forth like this for a while, which made the hair cut go by so quickly.

We didn’t have time to talk about the downsides of economic change, how one hour away, there are small towns that are emptying and undergoing opioid epidemics, how a fly fisherman I know has two children who are heroin addicts, leaving him to care for a grandchild.

We may talk about that next time.

I really love chatting with Mark. It is one reason I keep coming back. I really enjoy the chats with my barber.