It is hard to imagine a time when Europe was imprisoned and enslaved, when millions perished in camps, and when democracy was on the verge of being throttled. And, it was just seven decades ago. 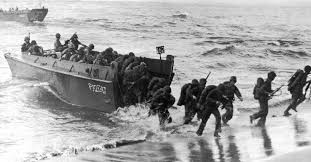 For my generation, we grew up in the Cold War, practicing “duck and cover” drills at school in case of a nuclear war and understanding that conflict could break out at any time again in Europe, as millions of troops, tactical nukes and countless tanks faced each other in the Fulda Gap and all across Europe.

Then, 1990 came, and the Berlin Wall fell. Noted philosopher Francis Fukuyama even wrote that the golden age was to stay forever, that “the end of history” from a political philosophy perspective had arrived.

Of course, it had not.

But, we are still better off than generations prior.

Today, marks the pivot point in that horrible war. It is the 75th Anniversay of D-Day, when Allied troops hit the Normandy beaches and defied all odds. If you’ve not read Stephen Ambrose’s Band of Brothers, please do so. The casualty rates among the early boats that hit the beach were over 90%.

Today, I will be at HBS for an Alumni Board meeting. I will listen intently as the Dean, professors and administrators talk about the school’s progress and challenges. I will sit in a comfortable room and enjoy great food, WiFi and company.

At times, I will focus on and, perhaps, obsesses about the challenges I face in my own life. I will read posts and pings and Tweets and deets.

But, I also will force myself to internalize that D-Day, that audacious and high-risk campaign that was nearly aborted a few times, worked, that I am here today and where I am because others some years ago gave of themselves.

To all D-Day veterans: thank you. To those families whose fathers, husbands, brothers, uncles, sons and nephews fought at D-Day and did not return home: I am so very, very sorry.