I didn’t watch last night’s first Presidential debate. Instead, I this morning read some online summaries and watched the video highlights.

And, I listened to the FiveThirtyEight.com podcast and read a really good article on post-debate “insta-polls” and how they correlate with more robust polling a few days later (article here). You may remember Nate Silver, who four years ago ran the polling work for the New York Times. He then left to start a new company, which ESPN funded.

He thinks HRC should rise up in the polls as a result of the first debate.

I like the podcast series because it is data-driven as much as possible. Rather than listen to talking heads “spin” the post-debate tenor, I like listening to analysts break down data on voter profiles, turnout, and hot button issues.

The site also runs a probability model to guess each state’s electoral vote outcome and forecasts a win probability for each candidate.  As of today, their “polls plus” model predicts 55% for HRC and 45% for DJT. 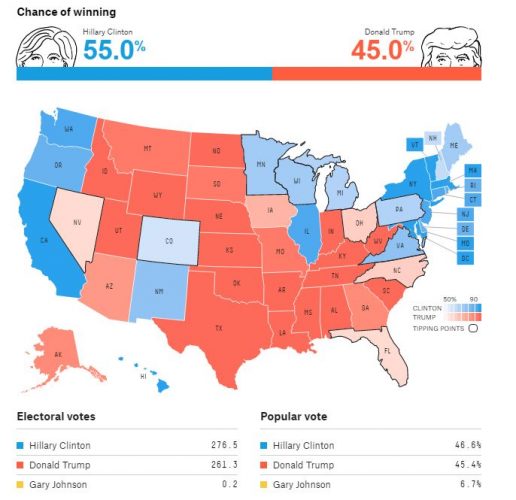