A friend of mine owns apartments and rents them to college students. Over the decades, he has assembled a large set of properties. He is the manager, too, and has his own team do all the maintenance and repairs.

He said that he has to pay a huge premium to lure plumbers away from his competitors. That’s because the economy is hot. There is a huge number of large construction projects in Boston that is absorbing a lot of labor.

“People are coming in from all over, such as Maine and North Carolina, for these big jobs” he continued. “There’s a huge shortage of people. You can be a newly-minted certified plumber or electrician and get top dollar.”

I’ve been thinking of that conversation as I watched parts of the Democratic debates the last two nights. I’m a fan of Andrew Yang and his book (about which I wrote here last year). I love his fresh ideas and sincerity.

I’m an Independent, mind you, but I think Trump is a lock for re-election. The economy isn’t perfect, but it’s pretty good.

There’s very robust analysis on how the economy predicts who wins elections (example here). And, now that the Federal Reserve has started cutting interest rates to stimulate growth, I think we are in for four more years, barring a major and sudden economic meltdown, which just seems unlikely. 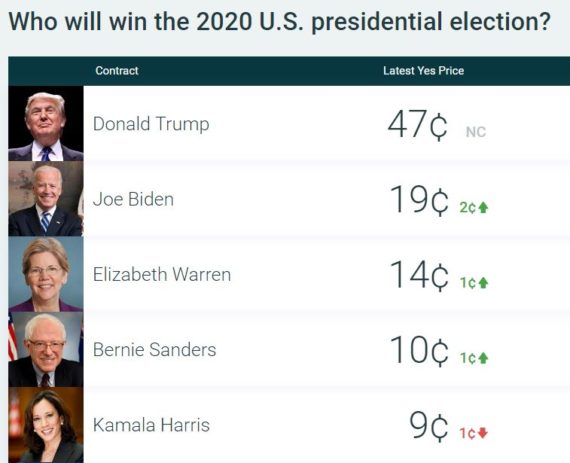 Four more years? Would be a major bummer for me, and I already am setting low my personal expectations.

But, voters assign way too much credit for a growing economy to the sitting President. It’s a classic case of correlation vs. causation, as most economists believe that a President has limited ability to influence GDP in the short-term.

As they say, timing is everything….