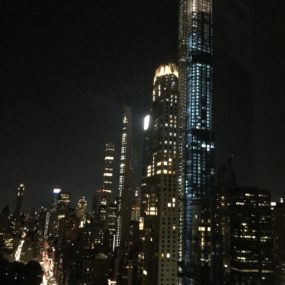 Mrs. T. and I are in NYC for a long weekend. We are celebrating our wedding anniversary. The Big 2-5!

I have been in charge of lodging, travel and dinners. I emptied all points balances. Mrs. T. plans our days, which has meant museums and a play.

It has been a joyful trip, including a moving visit to the 9/11 Museum and a fantastic surprise, all of which I will explain below.

We stayed in SoHo and are now at Columbus Circle. The second hotel really went all out for us, as we got a much a nicer room than I had booked. We have some great views from high up.

We are having some good meals: baby squid in their own ink at a Basque place, rotisserie meat wraps from Dave Chang’s Bāng Bar, ridiculously good Italian before a play, homemade pasta with (yes) squid ink at a place with incredible flowers, and, French food with our son, who is working in the city for the summer. I also had a Japanese breakfast one morning and found some nice cafés for leisurely morning croissants and tea.

As luck would have it, one day, a jaunt from a museum to our hotel retraced my old walking commute back when I was at my first job after college. I walked by my old apartment, as well as the office building where I used to put in 80 to 100 hours a week each and every week.

My former colleagues and I still joke about Wasserstein Perella: it was where investment banking analysts’ dreams went to die.

I also passed by two churches where I used to go to Mass during a pivotal moment in my life. It is hard to believe that three decades have ticked by. I said a quick prayer at each one to give thanks for an unexpected life with some twists and turns and much joy.

One night, we saw To Kill a Mockingbird, which has set revenue records on Broadway. It was amazing, and I highly recommend it.

It was not easy, but it was necessary. We visited, and it was poignant, heart breaking and surreal. It is a must-see.

The most moving detail for me was hearing a looped audio recording of what Ground Zero sounded like. Each firefighter had a distress beeper, which chirped if it detected no movement. After the attack, it was a cacophony of chirps, like many mournful crickets, as hundreds of beepers went off endlessly, as hundreds of first responders lay beneath the rubble, a monstrously enormous burial site.

Here is a video of it.

The museum is full of details like that, each very moving. There also were stories of heroism and survival to brighten the experience. But, as the museum is built on top of Ground Zero and the foundations of the World Trade Center, which you get to see, there is a visceral sense of sadness and tragedy that pervades the space. 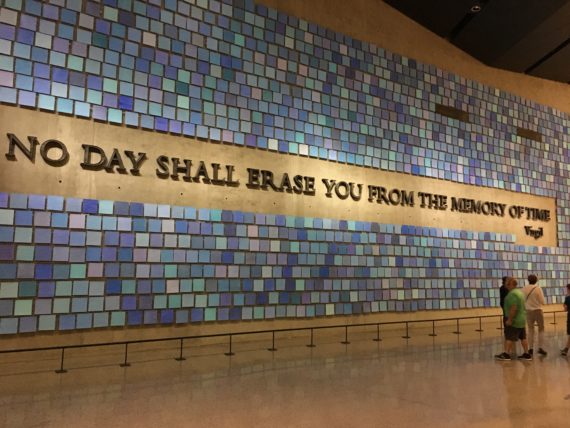 On a happier note…. 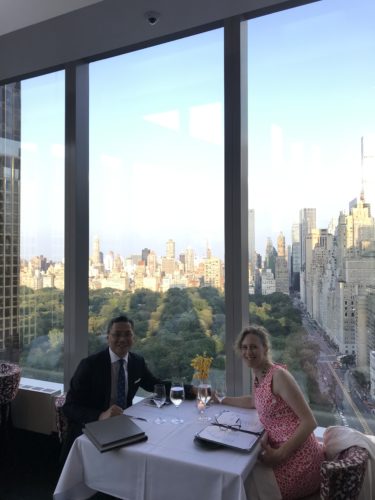 On our last night, we had a special anniversary dinner at Asiate. The views were great, the food was amazing, and the staff was very kind, especially Chef de Cuisine Joshua Vazquez, Luis, Ini and Slim.

A highlight was a Baked Alaska, a fancy ice cream cake, for dessert and which I had custom-ordered. Ice cream is Mrs. T’s favorite dessert.

For the first dinner on our honeymoon, I had requested a Baked Alaska and surprised her with it. I thought it would be fun to do the same thing 25 years later.

It took quite a few emails until I found a restaurant that would do a nut-free and gluten-free Baked Alaska. The staff did a great job of unveiling it and giving it the ol’ flambé treatment.

Everyone was in on the secret except for Mrs. T. And, Luis told us afterwards that their entire team knew about it and was excited to see her reaction. Chef Vazquez came out to say hello during a busy evening, which was very kind of him.

Mrs. T. was shocked and very happy! We agreed it was a dinner we would never forget.

It has been an amazing trip, and we head back soon. First up, though, we will meet up again with our son for brunch and more Baked Alaska.

Here’s to another 25 years!