At 3:30 am, heading to the river, I am starting to ease into the two-hour drive. But, I feel a clench in my gut that makes me wonder what is up. That’s when I realize it is May 12.

May 12 was when my mother was born and was when she died. That year, it also was Mother’s Day. A trifecta of coincidences.

I’ve blogged a bit about my mother in the past (posts here, here and here). She was the largest influence on my life. May 12, as a result, is not a day to which I look forward.

I drive and drive. I listen to podcasts and make a pit stop at one of the last stretches before it becomes rural and gas stations disappear. There really is something about twilight and dawn. You can catch a glimpse of effervescent colors before the sky changes again in a few minutes. 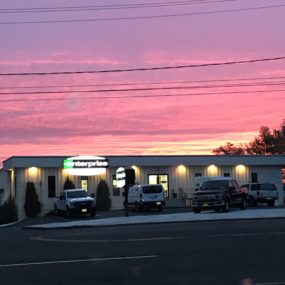 Later, I ease into the river and am the only one around. It is cold out and rainy, too. It’s my kind of fishing day, as the weather will ward off the crowds.

There aren’t a lot of people out, just some hardy souls.

Over the morning, I work the water hard and occasionally think about my mother: our days in Brooklyn, the sound of her laugh, how quick she was to smile and help others.

I think of her older brothers and sisters, all of whom died by their mid-60s due to the long term effects of being war refugees. My mother was only 60 when she died.

She and her family really, really suffered.

A tug on the line breaks up my thought patterns. It is a beautiful trout. I keep fishing, and I am fortunate to have a high-volume morning. I don’t know why, but I have a gift for fly fishing. I’m grateful for it and the chance to be outside in some beautiful conditions.

The best fish of the day is a 16″ wild fish that strains my tackle and squirms and flops in my net, full of life.

These fish are hard to catch, and it is a real event to see one.

I keep fishing. Amidst the thoughts about a passed loved one, it certainly is a reprieve to see such life. The fish always give me hope. On this day, it is a particular relief to see them.

Just after lunch, I drive back in the rain and run into much traffic. I meet up with Mrs. T. and one of my children at church. We’ve asked that the May 12 Mass be celebrated in memory of my mother.

I am late. I left with plenty of time and ran into some accidents. A two-hour drive became close to three.

I pray for my mother, but the thoughts come slowly and without feeling. Sometimes, on May 12, I can feel exhausted. So, I’ve learned not to press it.

As I texted to Mrs. T. earlier in the day, May 12 is such a marked day for me: a day filled with both deep gratitude and profound grief.

In the evening, my sister posts on Facebook an old photo of our mother. I think it is her old passport photo, taken just before we all left Indonesia for the Bronx, and, later, Brooklyn. I was probably about a year old when the photo was taken. 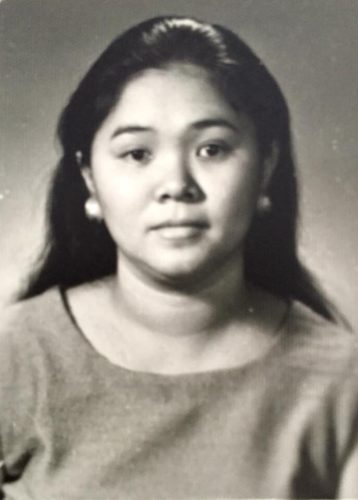 She looks so serious in the photograph. I cannot imagine the dread she felt about leaving her family and friends. But, the move was to be temporary. My father was going to do a residency in Pediatrics. Once done, we would move back to Indonesia.

Back then, if you were ethnic Chinese in Indonesia, very few were allowed to be physicians. And, if you were lucky enough to test high enough and be admitted, you could only be a general practitioner; the government wouldn’t let you be a specialist.

My mother really wanted to go to law school and work and make her own money. But, she thought a few years in America would be fine. My father could then make more money when we returned.

Unfortunately, renal failure meant that she couldn’t move back. So, we stayed. It took a long time for her to come to grips with such a change in her life plans.

I should call my sister every May 12. But, I don’t. I used to, but, each time, one of us starts to cry, and the call ends quickly. I think death is always difficult, but the death of your mother is a sting that resurrects quickly when you let it.

I decided a few months ago that I will write a book. It probably will be about our family’s journey. I don’t know yet, but I feel pretty compelled to write something.

My mother will be featured strongly in the book.

So, it’s Mother’s Day, and here are my two cents. You may love your mother. You may dislike her or, even, hate her. But, I encourage you to call or write her.

You see, I cannot call my mother anymore, and, while you still can, please do. Once the opportunities end, you cannot get them back.