For our wedding anniversary, Mrs. T. and I again did an overnight in Boston. It’s a real nice break.

The hotel surprised us shortly after check-in by sending up some cake, two flutes of Prosecco, and an additional bottle of Prosecco, too (which we did not open, for the record). We also traded presents, and Mrs. T. gave me this painting. It’s based on a photo of one of the fish I’ve caught. 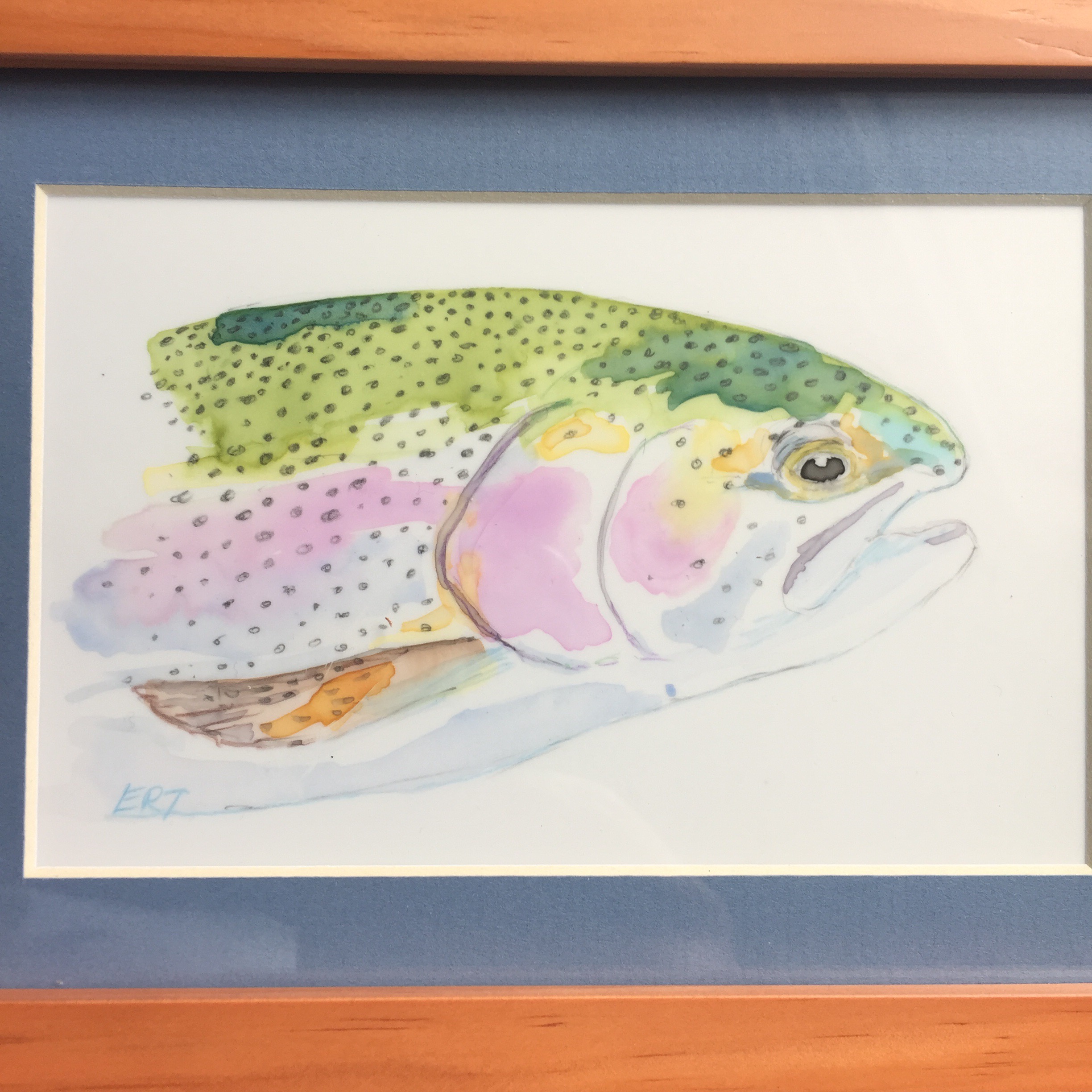 It was a nice change to walk arm-in-arm around Back Bay before dinner at Terra. The next day, we leisurely drank coffee and read the papers at breakfast. After a workout in the gym, we headed to Eataly Boston for lunch and to bring home some treats for the children.

It sounds like a pretty sedate outing–and, it was. The focus, though, was on each other.

When you marry, and, later, have children, your roles change. You start to wear other “hats,” such as bill payer, financial planner, cook, driver, launderer, trouble shooter, etc. The responsibilities of running a household and being a parent grow and grow.

And, over time, you’re not just a spouse, but you’re wearing these other hats, too. A weekend away is nice because it lets us again hang out and just be, well, together.

When it is just the two of you, and she smiles a certain smile, and she holds her wine glass just so, you remember how you both moved to Asia for work and emptied your wallets on frugal get-aways: the seaside dinner in Phuket, the rice terraces of Chiang Mai, and the beach stay at Bali. We’re young, you said to each other, and we do not yet have children, and we may never come back. So, let’s travel.

You remember the times at dusk when hordes of bats in Pangandaran would stream out from their caves, while you ate a freshly-cut pineapple that you had bought from a poor boy no older than five.

You remember the sweetly-scented flowers, the sharp smell of the sea, the fragrance of clove cigarettes, and the untold amounts of black exhaust spewing from motorcycles and Tuk-Tuks, making her white sunhat grey from the pollution after a long bus ride.

You remember the elephant ride in Nepal and seeing wild rhinoceri up close.

You relive these memories, ones that you guard as a couple, for there were only two of you then, and there were no other witnesses to those moments.

You remember how nervous you were when you asked her father and step-mother for their daughter’s hand, how you wore a blazer and tie, and how the step-mother fixed your collar when you walked into their house, for it was askew.

You remember your wedding day in Marblehead, how you felt outside of your body when you were up at the altar and she appeared and started walking down the aisle. You remember the picture-perfect weather, with blue skies and no clouds, as though heaven approved of the union.

You remember your first apartment rental near Central Square, how the kitchen was smaller than what you find in cramped Manhattan, that you only had a small fridge like the one you had in college, but you didn’t care, for you were young and in love and b-school was about to end, and even though the freezer section didn’t work, it meant that you had to finish right away a newly-bought pint of Ben & Jerry’s in one sitting.

You remember when you had budget for only one meal out a week, and it often was Bartley’s for $8. You remember how she always ordered The American Burger when you went to The Pour House while you were dating.

You remember the arrival of each of your children, and when the noro-virus swept through the family like a battalion of angry Cossacks, unleashing indiscriminate havoc.

You remember the fear, when it hit you: How am I ever going to be able to buy a house, fund college for the children, and save enough for retirement? You remember how you both clipped coupons, but, somehow, with no buffer, you made the dollars stretch and stretch.

You remember the colds, flus, crises, and evenings filled with anger and despair, but the notion, deep down, that this marriage was worth it and worth everything, that, somehow, you weren’t going to permit unstable people and outside forces take away that gift that you’d given to each other.

You remember your mother’s wake, at which you were to give a eulogy, and as the service started, how your right hand shook uncontrollably and without warning, and how she saw it and held it tightly right away.

You remember those early days, ones that feel so close yet also far away, the ones that keep you together, even when circumstances conspire against you.

And, this is marriage: the happy times, the sad nights, the zig-zags of life. And, through it all, you two are there, standing. Usually close together, and, on occasion, at arm’s length. But, together nonetheless.

If you’re married, I hope that you too can enjoy some time away as a couple. In our case, we were only a 15-minute drive away. But, mentally, we were in a different world.

Happy Anniversary, Mrs. T. Thank you for everything!

2 thoughts on “Our Anniversary”