(11.15 am update: Sadly, the NY Times just flashed this headline: “Kremlin Prepares for Military Intervention”.  So, it has begun.).

I’ve been reading with great interest about the turmoil in Ukraine. In college, I was lucky enough to spend two weeks in the Soviet Union as part of an exchange program. So, I try to keep up on current events.

My honest POV is that Putin will invade Ukraine, or the country will eventually split and Moscow will control the eastern part. I think the President and our State Department know this.

Here’s why: ethnicity and economics.

1. Ethnicity
I’ve always been struck by how split the country is along ethnic lines. It’s basically two areas: a Ukrainian-speaking west and a Russian-speaking east. Here’s a map showing that: 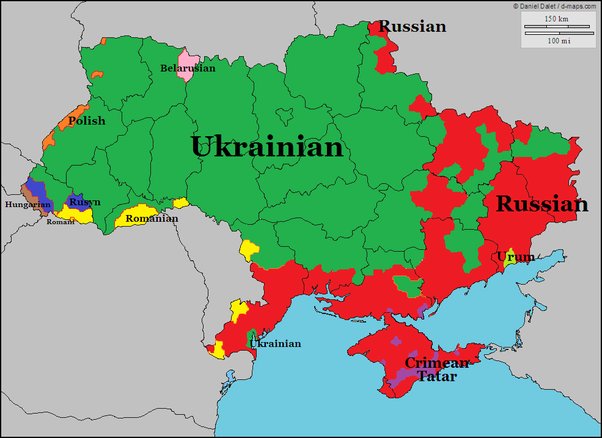 2. Economics
Ukraine’s economy is a mess. The citizens basically need other nations to bail them out. Russia is very willing to lend money and at one point bribed the Ukrainian government with a $15 billion loan program if it did not join the European Union.

Putin needs Ukraine in its orbit. Why? Economics. Russia supplies 25% of Europe’s natural gas needs, and 80% of that goes through Ukrainian pipelines. Here’s a map:

So, in the end, Ukraine will continue to be in Russia’s orbit. Western governments can protest all they want, but Putin will just call their bluff. He knows that the E.U. won’t risk war over the issue. They need Russian gas to keep their economies going. He needs the revenue from selling the gas. So, they need each other. Sadly, Ukraine is just a side show for them.

So, that is why I think it’s inevitable that Russia takes over at least half of Ukraine, whether overtly or covertly. IMO, the European, U.S. and Russian governments are looking for a way for each to save face.

It’s a global poker game. And, Putin has the strongest hand at the table on this one.

My heart goes out to all the protesters who have risked so much for so long.