This is a re-post of a blog entry I wrote a few years ago. I thought it would be appropriate to re-run it, with today being Mother’s Day. This time, I’m adding a picture of her, my sister, and me. We had just emigrated from Indonesia and arrived in Queens, NY. 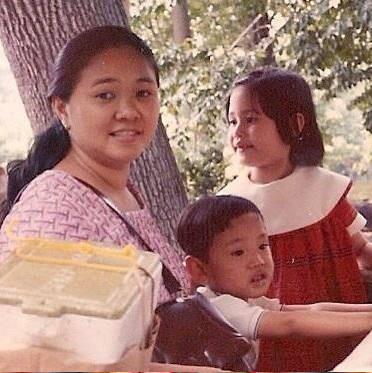 This is a hard post to write. Today is May 12. It is the day of my mother’s birthday. She also died, at age 60, on May 12. That day also happened to be Mother’s Day. It was a difficult day with too many coincidences.

Soon after she passed away, I was at the funeral home. My mom kept in shoe boxes every greeting card my sister and I had ever given her. She had asked my sister that the boxes be placed in her casket after her death. I didn’t know about either the boxes or her request, until after my mother died.

And so, there I was, waiting for the funeral director, going through card after card as I relived past decades. There were hand-drawn cards from our youth, with unsteady writing and crayon pictures. There were also the polished store-bought cards I had sent as an adult. Birthdays, anniversaries, holidays. Too many memories. In shoe boxes.

The director came up to me. I stood up and handed the boxes to him. Giving away those cards was hard.

Afterwards, I drove back from the funeral home, and I thought about many things. In the silence, I thought about how my mother didn’t want to emigrate to the U.S. and leave her family, friends and culture. I remembered the very hard life we had when we first moved here with just $1,500. I remembered well our dilapidated apartment in a beaten-down part of Brooklyn. But, in the end, my mother persevered. She wanted a better life for her children.

As I drove, I regretted that I had never thanked my mother for moving to the U.S. It was a long drive.

Growing up, my mother used to say to me: “Please work hard at whatever you do for a living.” It was her polite way of saying: “I’ve given up a lot so that you might have more–so, don’t waste my sacrifice.”

Why do I write this? First, I think many VCs like what they do because we really identify with people who want to chase the American Dream. I definitely do.

To me, being a VC is not just a job. It’s personal.

Second, I find that many entrepreneurs can point to a person, who unwittingly planted the seeds of entrepreneurship in them early in life. I have met with probably over 5,000 founders in my venture capital career. They come from many backgrounds and areas of life. Not everyone shares why they are starting a new company, but when they do, the stories are fascinating. I find that these intensely personal “drivers of drive” are very inspiring.

I’d like to close with two last items. First, if you’re an entrepreneur, I’d love to hear about why you are one. You can always get a job working for someone else, but yet, you’ve decided to start something new. Why?

Second, to my mother, I hope this somehow gets to you: a very belated and deeply-felt thank you….