So, on Thanksgiving, in Connecticut, up to 60 people will gather when you add up all of the grandchildren, in-laws, boyfriends/girlfriends, and great-grandchildren.

It is a special family gathering. There’s a long period for appetizers and cocktails. Everyone is assigned a dish to bring. One uncle always makes the mashed potatoes, a particular aunt always makes the creamed onions, etc., and one of the oldest siblings hosts the whole affair.

Two massive turkeys and a huge ham are served, as is an endless stream of pies. Furniture has been cleared out, and tables and chairs have been placed throughout the house, so that the meal is a sit-down affair for all.

It’s a very polite and highly-educated family with an air of rectitude. In some ways, there is a bit from The Official Preppy Handbook. In many ways, they are among the most interesting and graceful people I know.

There have been multiple divorces through multiple generations, as well as serious illnesses and deaths, meaning that the people who attend have rotated. Yet, every new guest is made to feel very welcomed.

When Mrs. T.’s grandmother, known as “Mummer,” was alive, she was the star of the gathering. Always generous with words and well-loved and well-respected by all, she was a giant in our eyes. We named one of our daughters after her.

In a time when just five percent of women went to college, she went to Smith College. Her grandfather was the pastor of the Congregational church in our town, and so, she herself grew up just a few blocks from our house.

I always enjoyed the many stories about how life was back then. She came from a long, long line of ministers, and an ancestor was one of the Pilgrims.

Things changed after she passed away. Fewer people gather in Connecticut for Thanksgiving, but each year, at least 40 people still do.

We don’t head down every year, now that our children are grown, but we do make the trip periodically. Our children enjoy seeing that side of the family. I think it gives them a sense as to who they are and from where they partially come.

As adults mingle and get caught up during these gatherings, very young children go to the basement to play with old toys with which their parents played at their ages.

I’ve been thinking of that side of our family because we last night hosted a dinner for some of Mrs. T’s local cousins and their families. They’re younger than us, and so, we had quite a few small children over. 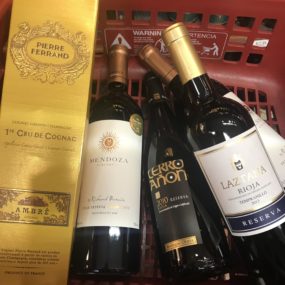 As children ran around and played, it reminded me of the times when my kids were very young. Meals tended to be short, and toddlers needed to be watched, almost without ceasing.

Mrs. T. planned a great party. She made home-made pizzas for the children, who later went to the basement to play with our kids’ old toys. Dinner for the adults was a Southwestern-style beef braise, which called for red wines from Spain and Argentina.

I really enjoyed the conversations. Our guests were genuine and friendly, and it was a nice evening. Parents of the very young periodically got up to check in on their children, but I hope they had a chance to enjoy the meal.

At one point, our group had a discussion about values. One of Mrs. T.’s cousins married someone from India. She and I talked about how values transcend race and continents. She remarked that she has much in common with someone who was born 6,000 miles away.

Mrs. T. and I come from very different backgrounds. But, we have much in common. “The most Chinese white gal I know,” I often joke. My parents, sister, aunts, uncles and cousins really liked her from the get-go.

I woke up early today to continue the clean-up. I told Mrs. T. to keep sleeping.

As I worked, I realized that one day my grandchildren will come over for Thanksgiving and head down to the basement to play with their parents’ old toys, too. A repeat in the cycle.

I look in the mirror these days and see more and more grey hair. I actually don’t mind all that.

But, I more and more these days remember my mother’s words, as she marveled at the passage of time: “Life is about seasons. Each is different, and you just have to enjoy what each one offers.”

Love, love, love your children this Thanksgiving holiday. Tell them how much you care for them. And, show it. I am convinced that the tangible and earnest love parents give to their kids will give them full hearts, ones big enough to handle life’s adversity.

If they feel “known and loved,” I think children can set out and do anything and everything. They will be able to move mountains.

I am convinced it is what Mummer would want for her grandchildren and great-grandchildren.