It’s the morning of July 3 right now. Already, the sun is shining powerfully and brightly, and the air is thick with humidity. As I drive to my favorite coffee place, there’s scant traffic. I see families start to load up mini-vans for their 4th of July long weekend.

I love the 4th of July. I’ve blogged before that, as an immigrant, I’m a “convert” to America. And, it’s stories like the one about which I’m going to write that make me think very hard.

In today’s New York Times, there is an article about the Gettysburg battle in the Civil War. On July 1, 150 years ago, the battle was not going well for the Union forces. In fact, they had to retreat.

To allow the main force to fall back, a brigade was brought forward to hold off the Confederates and buy some precious minutes. In other words, that group was sacrificed for the greater good. Of the 400 men in one regiment, only 32 made it back.

Among the dead, was a Union soldier, unidentified, who was clutching this picture when his body was found: 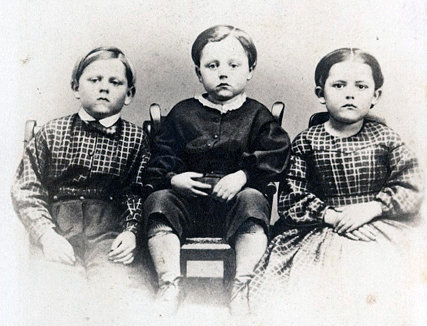 I cannot imagine what it is like, to be mortally wounded, lying in the hot sun, and hoping the best for your wife and children as you near death.  You’re alone and behind enemy lines.

Later on, after a national search, the soldier was identified as Amos Humiston. His wife had mailed the photo to him. Two months before Gettysburg, here is Amos’ note back, complete with his own sense of spelling and grammar:

“I got the likeness of the children and it pleased me more than eney thing that you could have sent me how I want to se them and their mother is more than I can tell I hope that we may all live to see each other again if this war dose not last to long.”

Today is a happy day for me. My wife and three of our children return home today from a trip to visit grandparents. The house will once again be full of noise, laughter and squabbling.

We’ll greet each other with hugs and kisses. We’ll talk about all the things they did in Maine. We’ll make plans for the long weekend. I’ll probably grill a few meals, and we’ll debate, as we do every year, whether we’ll go and see the fireworks.

But, I’ll also be thinking of Amos. It would be hard not to.