My gosh, where to begin?

I just worked on a team project that created joy and camaraderie for a large group of people. And, all credit goes to the nearly 30 people of the first-ever HBS alumni online talent show cast and crew.

Our b-school class recently put on the event, which we called the “Zoom Boom.” Our team’s thinking was to offer something uplifting to our class, given all the bad and sad news that surround us.

Personally, I also had thought of the neuroscience research that shows that giving creates happiness. I thought we all, both cast and audience, could benefit from a pick-me-up. So, why not put on a Zoom Boom?

I also hoped our class would respond to the idea. For some reason, we have set reunion records three of the four times we’ve convened. There really is something about our group.

So, we pitched the idea for an online talent show to Susan Gold at HBS, and she immediately gave support. The school lent us a Zoom Webinar license, and Kathy Ashraf helped us at each step of the way. We became the pilot that, if successful, could encourage other classes to do the same thing.

Then, Jody Fink, Joanne Hoffer and I, who are among those working on our upcoming 25th Reunion, brainstormed about a name for the event and which classmates to approach.

Honestly, what started as a low-key affair exploded into something exciting. We saw momentum right away. People were hungry to re-connect with each other during this pandemic and after the horrific murders of George Floyd, Ahmaud Arbery, and Breonna Taylor.

We contacted Jon Phillips, who played the musical lead each year in the school musicals. Jon and I sat next to each other during the first semester; so, I felt comfortable asking him. He agreed to be the Master of Ceremonies. I thought that was huge, as Jon is not only extremely talented, he is humble, too. The M.C. would set the tone for the event.

We also pinged Alex Martin and Jamey Sperans, who are funny and are great singers. Alex is on the reunion team and is our Class Secretary. Jamey and I were in the same study group at school and, before that, we were in the same plebes’ training group at Bain & Co. They convinced their a cappella group, Heard on the Street (or HOTS), to get back together.

So, we had the start of a show.

Then, Becca Fogg, a legendary vocalist in our class, signed on. She recommended Franz Heinsen, who is an award-winning pianist and also was part of the school musicals. For fun, she and Franz used to perform to packed NYC jazz clubs on weekends. They’re that good.

Sean Ford is well-known for being among the wittiest of the witty and was a major pillar of the school musicals. He agreed to do a bit, which became the keynote speech.

And, Laura Fortner contacted her former a cappella group, the She-E-Os, and they put up what became an amazing grand finale for the event. She also recruited other classmates and family members.

We created a promo video to generate buzz and worked on a script. The cast recorded their performances, and Jon coordinated with them on the live-interview portions. We had some tech planning sessions to fine-tune things.

It was shocking to see so many classmates log in from the U.S., Europe, and Asia. It was thrilling when the chat stream absolutely erupted. And, it was electrifying to see the cast hit an absolute home run: people who have been friends for over 25 years got back together to give something to our class.

As the show streamed, frankly, I was fighting back tears. I was amazed at the cast’s talent and generosity, and I saw how much heart they put into everything.

The audience’s reaction was amazing. Afterwards, we received many gracious emails from classmates.

Our team both gave and received much in return. For the cast, there was the joy of the pre-show prep sessions. For me, this project was a welcome distraction, given that some family members contracted the virus, and I didn’t think they would make it (prior post here).

The video is above (many thanks to Andrew Palmieri for editing the final product). I promise you will laugh and feel moved. For your convenience, I’ve added time stamps and descriptions: 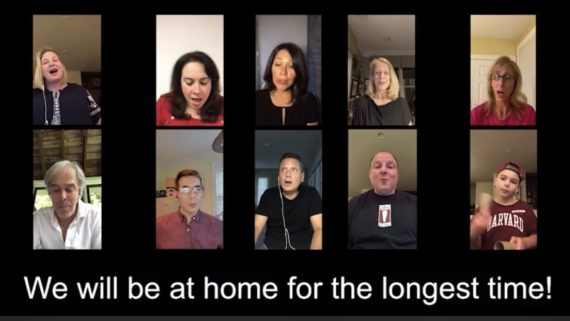 The cast and crew put in hundreds of person-hours to make this happen. They gave a gift to the class that will be remembered for a long time. Here they are, in no particular order. I’ve added their social media links, too, where available: