A white-knuckle drive through a snow storm. Car accidents. A winter wonderland. The Yale Whiffenpoofs. That was a day in my life.

I went back for my college’s annual alumni assembly. It was my first time to this event, as I was asked only recently to represent my class. Man, what a tough drive over. Lots of snow, limited visibility, treacherous. Cars wiping out and stuck in ditches. 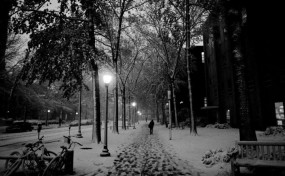 But, I made it safely to New Haven and then walked from the hotel to a restaurant. It was closed due to the storm. A FREEZING walk. Wind whipping by and through me. I walked a bit further and escaped the wind and snow after I entered another restaurant nearby. “Union League” the sign said. Fine with me, I’m just cold and need a warm meal.

A nice place. Great service, not too stuffy. As I was eating my dinner, I noticed a large table of young men a few tables over. They wore blazers and ties and talked animatedly.

“Who are they?” I asked the waitress. “The Yale Whiffenpoofs,” she answered. I smiled.

The “Whiffs” are an old Yale tradition. They’re an a capella group comprised of seniors. It’s tough to belong: many try out, and few are chosen. They sing every week at a place called Mory’s. They tour around the world. Most of the men take a year off from school to devote their energies to the group. They now also sing at the Union League, which I didn’t know when I walked through the doors.

When people buy them “chalices” (large silver trophy cups loaded with alcohol), they come over and sing a song. I sent over a chalice. I recorded their singing (video is below). It’s in honor of my college class.

Afterwards, and grateful, I sent over another chalice and chatted with some of the guys. I was struck by how humble they were. Seriously. Really down-to-earth and thoughtful, even though they’re at the pinnacle of their college careers.

But, I’ll just end here. This post is really about nothing other than great singing, a meal that re-energized me, and an authentic connection with a college to which I’m forever loyal.

After such a long drive, The Whiffs really made my day.