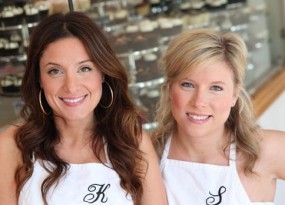 “You’ll never regret your decision to leave and start your own company,” she said.

“You can always get a job. Why not try?”

I was making the rounds at the previous VC firm where I worked, telling people why I just quit.  I still remember a particular conversation with Sophie LaMontagne.

Years later, I heard about a decision Sophie herself made.  She quit to start a bakery with her sister (Sophie is the one on the right in the photo above, and her sister, Katherine, is on the left). The two love to bake and had for a long time dreamed of starting together a bakery. They decided to quit their jobs. The pair pooled together their savings, took out a loan, and proceeded to wake up at 4 a.m. to make cupcakes.

Flash forward.  Georgetown Cupcake now comprises six stores around the country, including one on Newbury St. in Back Bay Boston. They’ve got a great menu and you can order the products online. Also, the sisters are the subjects of the reality TV show on TLC, called “D.C. Cupcakes.” They just published a cookbook.

The last time I chatted with Sophie, she sounded so excited. I’m so happy for her. Success could not have happened to a nicer person.

I mention this because I this weekend was telling my daughters about Sophie, and how the desires placed in your heart are there for a reason. “Follow them,” I told them. “They’ll lead you to what you’re meant to do.” Sophie loves to bake. She used that affinity to build a business that really fits her passion.

I’ve written recently about the paucity of women entrepreneurs. I want my children to have role models and not to fear failure.

I was glad to tell them about Sophie and Katherine.

One thought on “From Venture Capital to Reality TV”