Today has been very busy. Frankly, it’s nice to have a normal day, after last week’s bombings, anxiety, and jubilation.

I also received the nice picture below, which reminded me of life before the attacks: 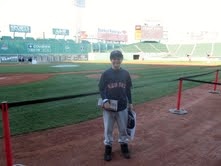 A few weeks ago, I decided to give away Red Sox tickets through a lottery (more here). One recipient was a veteran, and the other, was a family facing some hard times.

Regarding the latter, the mother was nice enough to send me the above picture of her son at Fenway Park. I had arranged for him and his father to get a tour and be on the field during batting practice.

[My son] had the time of his life last night. He loved the tour. He even caught a foul ball. Here is a picture of him.

I love this kid’s smile. I’m hoping he now knows that strangers can care.

As an entire city, we in Boston experienced that last week.  Strangers killed strangers. So, then, it was fitting that strangers helped other strangers get to the emergency room after the bombings. And, 9,000 troopers and police raced around to find terrorists to protect citizens whom they didn’t personally know. We tried to balance, as strangers, bad deeds with good ones.

I think there’s something very powerful when we can show kindness to others. For me, after such an insane week here in Boston, it feels great to give someone joy.