A funny thing happened to me at the river today.

I awoke at 3:30 am for a two-hour drive that would put my on the water at sunrise at a favorite spot. It’s small-bug season, and it’s one of my favorite times of the year to fly fish. Delicate presentations, small flies, and light lines are needed. Most anglers stay home because conditions are so tough.

You also need to move slowly at all times when in the river, so as not to spook the trout. That’s also why you seek a quiet spot that is away from others.

I was onto a few fish and feeling pretty good. Unfortunately, another angler saw that I was connecting with trout and moved towards me. I couldn’t believe it, but he then parked quite near me and started fishing. 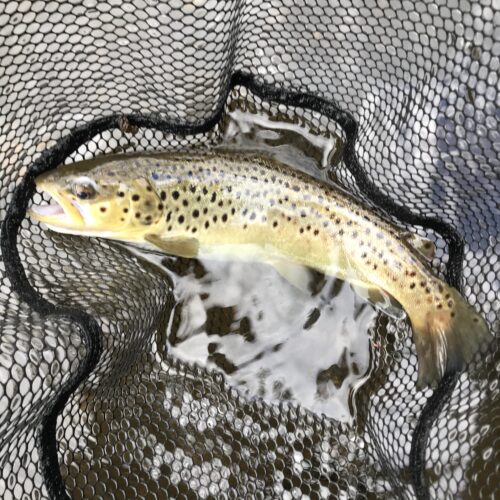 There are many unofficial rules to fly fishing. A critical one: don’t crowd another angler. Polite rebuffs usually happen. On occasion, there are f-bombs and outright yelling.

I’ve been on a mission to be more generous, and I want fly fishing to be a stress reliever rather than a stressor. Normally, I would ask the other angler to move on. But, I didn’t. I decided to live with my new neighbor.

The other guy was an older gentleman. I’d say he was in his 70s, maybe older. He had all the right gear and cast beautifully. Normally, when someone crowds you, it is a rookie. But, this guy knew the etiquette. He just chose to ignore it.

I caught more fish, but not as many as I would have liked. Dark thoughts pervaded my head, but I still said nothing.

Then, I remembered something from the David Foster Wallace video, This Is Water. He spoke at a college graduation and counseled the students to be more empathetic. Specifically, when someone crosses you, he asked them to envision why that person was being rude. Perhaps, there was a good reason why they were being obtuse.

So, I made up this narrative about the abutter:

Honestly, that made-up story made me feel better.

A few hours and a few trout later, I decided to move out. I waded to the bank, climbed a dirt path, and started to walk back to the car. On the way, I noticed a red tent and car. Wouldn’t you know it, but that angler was there. He was slowly starting to pack up his gear. His movements were slow, and he didn’t look very happy.

And, he was alone.

As I walked to my car, I was pretty floored by it all. I don’t know if the guy is a widower, but I certainly felt good that I didn’t bark at him. Maybe it was all made-up in my head, but who knows?

The Wallace video is excellent. I’ve written about it before, and it still bounces in my brain on occasion many years later. I hope you watch it. It’s great.