On the way back from our fly fishing outing, my daughter and I were heading south on I-93. Just below Franconia Notch in NH, there were temporary signs along the road, alerting us to road work up ahead.

Soon, traffic slowed to a crawl, which was weird for a Saturday morning when you’re going southbound.

This wasn’t road work, I realized, when I saw this sign. 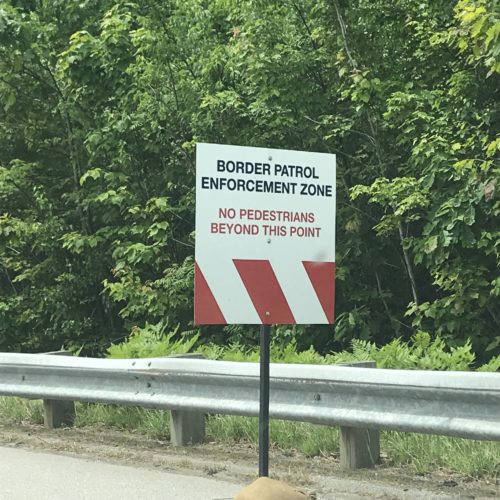 Soon, we saw quite a few government vehicles and armed men in dark-green uniforms and wearing sunglasses. The Border Patrol.

One agent, with a guard dog, was walking up to cars and seeing if the dog reacted to anything.

I joked with my daughter that I should maybe talk with an accent. 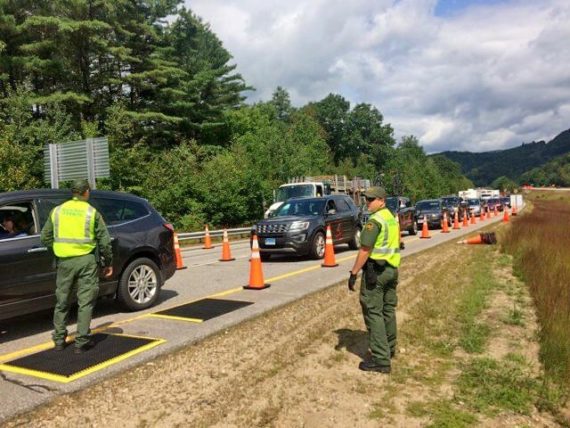 Soon, we were at the head of the line. I lowered the window. A very large agent looked towards the back seats and saw our bags and fishing gear.

“So, you’re a naturalized citizen?”

“How old were you when you were naturalized?”

The agent waved us through.

When I returned home, I did some research. The Patrol is allowed to run checkpoints within 100 miles of the border, which means that most of the Northeast is covered. The Trump administration has increased funding for such checkpoints.

I also learned that agents are looking for a number of warning signs, including when people speak with an accent. So, I’m glad I didn’t fake one.

During the drive home, my daughter and I spoke a bit about the topic. Imagine if someone in the car had some drugs or THC vape oil? Imagine if you were an illegal immigrant and just returning home from a hike in NH? Imagine if you were legal but spoke with a foreign accent and wore traditional Muslim clothing?

The Border Patrol issued this press release after they finished their checkpoints. They did arrest some people and seize some drugs.

Honestly, it felt pretty strange to go through the checkpoint. So many mixed emotions about it.

9 thoughts on “The Border Patrol”