Yesterday, many newspapers reported about the low number of Americans who have registered for new health plans under the Affordable Care Act. There is a NY Times illustration here, outlining how 106,000 people have picked a plan (but not necessarily bought one), which is 80% below the Administration’s projections.

Thanks to #Obamacare, more than 500,000 Americans have already signed up for health coverage. #GetCovered, pic.twitter.com/CZ6g95XLOK

I was interested in how people would react this, so I clicked on the Tweet to read other people’s responses. Here’s what I saw: 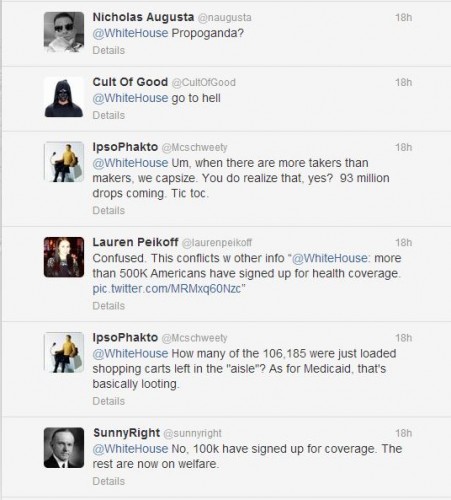 The “power of the crowd” is interesting to watch, now that we can read real-time reactions. Frankly, I think social media has changed politics. A “message” used to be parceled out to journalists, who then wrote articles. Now, a politician can reach out directly to constituents.

The challenge is that the crowd will respond very quickly, as it has done in the above example. You can now blow a quick whistle if you don’t like what you’ve read.

I think that’s a good thing.